On the Tail of Typha’s Gold

The scene…a golden afternoon in June, at a local muddy pond.  The character, a thin ragged yet energetic female leaps off her bike with Midas like glee and pushes down a thickening trail of turquoise-green leaf spears taller than her plaited head, broad soled battered brown sandals squelching and sinking into the mire.  After a few feints and colourful language the woman realises that this will be her lot if she is to find what she seeks, and she accepts the brown waters rising over her toes and cloaking her ankles, smiling at the harsh baking blue of the sky as she sighs with the cooling delight of the mud, understanding now the hippopotamus.

She cracks off young green flowerheads to boil later for food, within the green velvet bursts forth sun yellow, turmeric yellow with the taste of sweetest buttery corn.  Rich in protein and delicious eaten right off the spike.

She also sneaks forth on the mature spikes with their dizzying clouds of yet more gold, sparkling in the summer air, finer than finest flour and that crazy yellow like all the joy in the world is lying in wait within it.  She captures the clouds, bending the spike gently til the puffs descend into the waiting maw of a Tesco carrier bag (yes, I know, this ruins the effect..but hey, they’re handy, and they don’t leak like a wicker basket does)

Later back at narrowboat base camp she sorts her finds.

Golden pollen, immature flowerheads (male and female), some younger stems to use as green veg, and some lovely mint.

Still with memories of the electric blue damselflies and the smell of the mint as she squlelched, the human begins to invent a recipe.  A delicious buttery tasting chowder soup with no butter needed, instead some plain soya yoghurt with its feral tang and some lime and some critters that live in the rhizomes…the crays, a poetic symphony of plant and animal that exist together in life an in dish.  Whacked on tip in a crispy foamy tempura and sprinkled with chives and more yoghurt.  Scrummy!  and I mean it.  Even my two year old ate all of it. 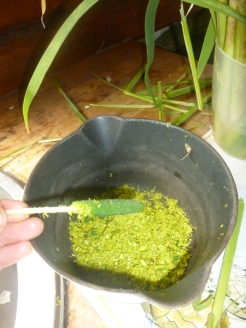 Left you can see the male part (top of spike) which has more to cook with.  this is the bit I used for the soup as it crumbles easily off the stem.  the female part can be eaten but she’s only a thin layer and better boiled and scraped off the stem like a lollipop! 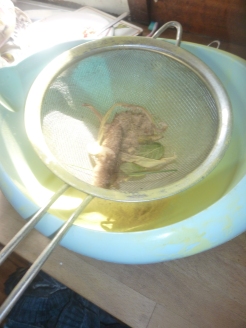 The pollen is very fine and needs sieving to remove all the tiny bugs.  Also leave it on a flat surface to let them escape (but not in a place with the slightest breeze, or you will be sorry…and it takes AGES to collect even a small amount, I think i got about 100g if im lucky.

The finished Reedmace Flower Chowder with Crispy Tempura Crayfish, dressed with yoghurt and lime juice and chives and with Typha tapas on the side  MMMM…