Have been photographing mycological mysteries whilst legging it about after my son (and preventing him eating said mysteries).   In order to identify a mushroom, these factors can mean the difference between life and death… Some of these are:

Well heres what I found… 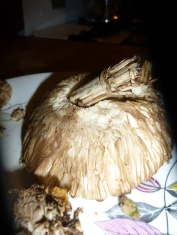 Shaggy Parasol (Macrolepiota rhacodes) , absolutely delicious fried with a dash of olive oil on Melba toast, and some fresh rocket 🙂  In Heath Wood.  Beware of any ‘Parasols’ under 8cm, even if they have a scaly dry cap there is two that may kill you given half a chance.  (Isnt life so much more interesting now its under threat!!) 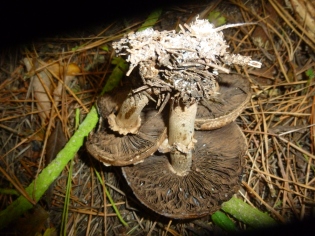 Brown Wood Mushroom ( Agaricus sylvaticus) at Tiddenfoot Lake.  Another great edible, and smells and looks it. Under conifers, height 5-12cm cap 5-10cm across.  Go for a warming stew or risotto, also good in Mushroom Ketchup.  Ps it wasnt me that pulled up this clump, honest to god! Far better to use a knife and cut the it doesnt damage the mycelium. 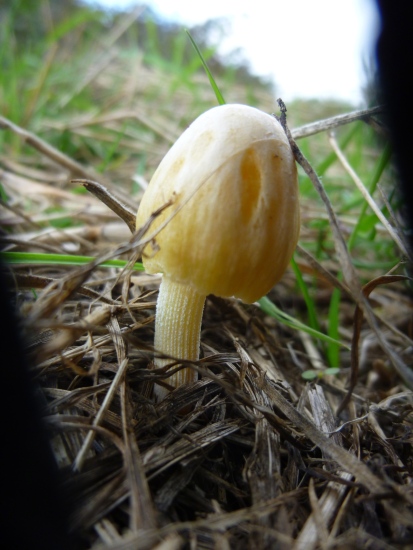 The cute little cupcake number above seems to be (at best guess) a Yellow Cow Pat Toadstool (Bolbitius vitellinus).  Inedible.  In Linslade Wood.  What  a lurvely happy yellow!!

A type of Milk Cap, am not sure which one though.  A true milk cap will ‘bleed’ a milky sap when cut.  Many (but not all) are edible.  Heath Wood.  Beware the Brown Roll Rim, which has a pretty shiny cap and looks very similar except the rim of the cap is rolled tightly under…its toxins build up in the liver an can kill you years later just when you think everything is cool….

Probably a Beech Russula…..or else the Sickener.  do you see how dicy this is!!  You never know which meal will be your last.  its like playing Russian Roulette.

(NB: I have never played Russian Roulette, and have no plans to do so 🙂 )

2 responses to “Fungal fun in Leighton-Linslade”